Goals: On Getting the Groove Back (Part 1)

Now something over three weeks into my full-time work as a self-employed writer, I’ve spent a good part of my time setting up:

Reading software manuals (Aeon Timeline and Scrivener, of which more later) and thinking about how to use their features to solve problems on my extant writing projects. Revision isn’t just tweaking commas; I have to check the architecture both for soundness and for beauty, and the timeline for consistency.

Creating easy-to-use tracking forms for writing, editing, beta-reading, research, and other business activity. I’m using Google Forms, and so far I’ve created and tested an Hourly Consulting form and a Work Log form. In the process, I’ve learned a lot about how I work and just how many projects are in play (25 of my own, and 10-15 each — past and present — for many of my colleagues for whom I beta-read).

Reviewing past projects. I found out rather late about a writing grant and decided to go out for it. The Reincarnations of Miss Anne, my most ambitious and least realized active project, was the logical choice. I’d been saying that I wanted to scout the locations as well as research from books; with help from a good friend with a car, I pulled the research archive boxes (three of them!) from storage and commenced to knock together an application.

I didn’t make that deadline. See “most ambitious and least realized,” as well as the title of this post. The groove is not entirely back yet, and I had a recurrence of the back issues that had cropped up at the end of my time at the late unlamented day job. But I did create a draft ebook of Reincarnations, and it’s very definitely on the horizon for revision this year.

A Cover Reveal and Some Thoughts on Revision

Concept covers really help me in the revision process, and with a fuzzy project, having to cough up a tag and struggle with image suggestions makes me think about what the book’s really about. 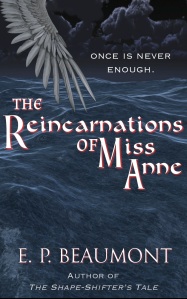 You’ll notice I’m listed as “Author of The Shape-Shifter’s Tale” which yes, means that the former will be available first.

I don’t like to miss deadlines, but the regrets taught me a lot: first of all, how I “should” have done it (which of course we only learn the hard way, see “scientific method”). Next, the realization that I was using only the most basic functions of my Scrivener software. That sent me back to the manuals.

And finally, this project really was ambitious. It sits right on the boundary between real (and very grim) history, historical fiction, and fantasy. I was a bit scared of it when I first finished the 64,000-some words of the first try in NaNo 2009. I felt guilty for just setting aside the unfinished draft and moving on to the next thing, but that turned out to be the right move.

The Next Big Thing(s)

The “next thing” was a whole lot of storytelling practice during 2010, hanging out with the MnNaNo group and taking prompts and challenges. (Links in the following discussion are to Amazon for published projects and excerpts on this blog for unpublished projects.)

That’s the year I picked up the 30-day character questionnaire, which I used in the October prep for NaNo 2010, not coincidentally my first finished NaNo project, The Shape-shifter’s Tale (NaNo 2010). In January through March, I used the character interview to learn more about the main cast, which spun off multiple stories, including Erika and the Vampire and Max and the Ghost, now published. Those stories were written in May and June of 2011 as “Mini-NaNos” (stories written in a week at 1667 or more words a day). In August I drafted Annie Brown and the Superhero Blues in under a month, for a 30,000-word novella call from a publisher.

One of the things that I noticed in the course of revising both Erika and the Vampire and Max and the Ghost was that I added scenes in rather than taking things out. I teased out the temporal threads and clarified scene-setting, staged scenes that had been summarized in the first draft, and thereby brought word counts from 10,000 words up to 15,000 or so.

Currently I’m rereading and revising Annie Brown, which has an even more frenetic pace. (What else would you expect from a superhero action/adventure/romance comedy?) After banging my head on the problem for a couple of days, I realized that it needs expansion rather than cutting. In fact, taking the elbow-room that the original concept wanted will take it from 30,000 words up to 50,000. This length qualifies it for a print edition (and yes, there will be cover reveals as production work proceeds in parallel with revision).

As an “early work” and therefore still fairly rough, this story will be the experimental animal for use of Scrivener and Aeon Timeline in restructuring and clarification of timeline. I’m opening up the timeline from a few days to several months, which will give a number of supporting characters room to develop, and will let me stage my original notion, a Shakespearean comedy with superheroes. Three romances take the stage (M/F, M/M, and F/F) with friendship and family drama along the way.

So, slowly but surely, I’m getting the groove back.

This entry was posted in NaNoWriMo, Writing and tagged Editing, Goals, NaNoWriMo, publication. Bookmark the permalink.