My mother and Basil argued over color, in a way that was immediately familiar when I was a student at the Academie Julian, drinking strong tea in the cafes with my friends. Those quarrels were the grown-up correspondent of my brothers’ wrestling bouts: undertaken with no real animus but a joy in competition. Amelie and Basil were colleagues, for all he did not paint in watercolor and she did not paint in oil.

And he admitted to her alone that he found her medium daunting, like fresco that must be painted patch by patch, not too differently: pigments in water.

Amelie (yes, I’m old enough, and my mother is dead) looked more like his sister than his sister-in-law: something in the cast of the face. They were relatives when they argued, in that friendly way that stepped outside the proprieties of the drawing-room and the tea-table.

There was no condescension in it on his part, which I recognized even then, because I heard grown men talk to her much as they did me, as if she were some pretty child in lace and satin, a sort of animate doll. Of course it was some decades beyond my seventh year that I learned that was the general manner of men to women, but that’s another story.

POV Leonie Hallward, niece of the painter Basil Hallward from Oscar Wilde’s Portrait of Dorian Gray. From novel-in-progress, Leonie Hallward and the Secession of Greenwich Village.

Weekend Writing Warriors offers eight-sentence excerpts from a variety of writers; see the other excerpts here. 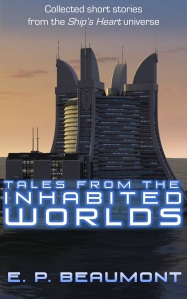 Tales from the Inhabited Worlds has been released!

Welcome to the complex landscape of the Inhabited Worlds. Survivors of a failed terraforming project have developed a brilliant culture organized around music, dance, and safety. An immortal dictator rules a fortress planet. Sentient starships dance in space. Aristocratic clans vie for control of the Mother of Worlds. Rumored space pirates lurk at the margins. Three different cultures stand on the brink of catastrophic change, in these nine tales of politics, family relationships, star-crossed love, space battle, and would-be empire.

Published by Glass Knife Press. Now available on Amazon; other distributors to follow.

This entry was posted in Uncategorized and tagged Excerpt, Fantasy, Leonie Hallward and the Secession of Greenwich Village, Weekend Writing Warriors, Work in progress. Bookmark the permalink.