Posted on February 8, 2015 by epbeaumont 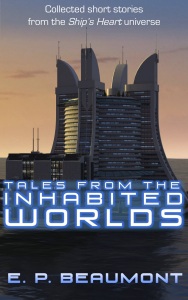 Inside the Jump / Outside the Dome / Don’t bother looking / There’s nobody home.

That’s a children’s rhyme on Sarronny, which contains worlds of paradox and irony: nobody home, but that absence means nobody any good. The Void is not the enemy, but something worse. It’s utterly indifferent, and we’re the anomaly.

For ages I could make no sense of planet-side stories, until I realized that planet-siders have the luxury of ignoring their environment. The sky and earth love you in such places; you’re a part of them, or nearly so. And the colors—photosynthesis is a marvel, and if humans could do it, we would never have left the Original World, and that wouldn’t be a bad thing either.

On Karis, they’ve never left off looking for the Original World.

Excerpt from “The Starship Captain’s Songs of Home,” in Tales from the Inhabited Worlds.

Weekend Writing Warriors offers a selection of eight-sentence excerpts from many different writers. For the full selection, see here.

This entry was posted in Writing and tagged Excerpt, publication, Science Fiction, Tales from the Inhabited Worlds, Weekend Writing Warriors. Bookmark the permalink.