Vacations in Romancelandia: Interview with the Bowman’s Inn Collective 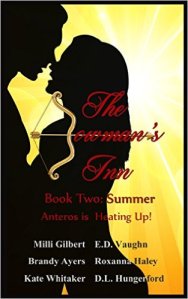 In the city of Anteros, you might find yourself at the Bowman’s Inn. You could be lonely, hurting, or lost more than you know. The bartender, Valentine Archer, will know just what you need. He not only looks like a Greek god, he used to be one. Cupid prefers to be called Val these days. But he still knows how to mend a broken heart.

Six authors have combined their talents to bring you a collection of tales with romance, mystery and maybe a little humor. Oh, and quite a lot of sex. The delightful short stories feature characters who own or operate the facilities of the Bowman’s Inn or are just passing through. Whatever the case, Cupid has a way to help all of them find what their hearts require.

So did you know each other before (is this a conspiracy) or did you just meet through this project (coincidence)?

ED: We know each other through another writing site

Brandy: We say it is a writing site but it is mostly an excuse for shirtless pictures of men

Roxanna: We started a secret group on Scrib so we can talk about the project and critique each other.

Milli: Which is where the shirtless men come in.

Brandy: Isn’t there one in the Bowman’s group? That needs to be rectified!

ED: I think I need more Chai to keep up

Milli: Should we call it the HotDish? Sorry, I’m Minnesotan to the core.

I’m kind of watching this in amazement. The interview that does itself. It’s immensely fun to watch all these wild horses.

Brandy: Now I’ve got that song running through my head

ED: We have ‘squirrel’ moments but it usually involves shirtless, hot, sweaty guys

Kate: DAMMIT now *I* have that song running through my head

ED: The wheels on the bus go round and round….

Milli: Oh. I have Wild Horses by Garth Brooks in my head…

Roxanna: Yes, we have play lists that go with our stories too!

OK, now for the Verbal Enticement part of the program: tell me what ingredients you threw into the pot for your story! And what it tastes like!

Roxanna: I threw in Jealousy, mixed in some scheming mother in law, and added a teen couple.  Tasted like raw salmon.

Milli: Ingredients: a little bit of peppermint icecream with chocolate, a fiery FMC who can take care of herself, even though she’s tired of it, and an MMC who’s willing to step back and let her deal with it – while he stands on the sidelines and watches.

So I guess mine tastes like an ice cream sundae on a hot summer day.

ED: ED will not be able to comment for a few minutes until she can regain composure… after laughing herself out of Starbucks

Brandy: My story is salty sweet like caramel licked off the chest of a sweaty cowboy

DLH A Beautiful Day has a dash of crime drama, a cup of serendipity, and a good pound of body image issues. It’s more sweet than spicy. Charlene is plump, and has very little experience with men. Some of that is due to her own shyness. Oh, it’s all baked in a paranormal oven, too. It tastes surprisingly light and leaves one craving more.

Since we are on the subject of visual inspiration – tell me about how you cook up your romantic leads.

ED: Mine was a question or pondering really…. don’t we all need a little bad boy in our lives…. and then I remembered my best friend from elementary school and boom

Milli: Uh… usually just start writing, or I see an image on Pinterest and think, “gee, I should write about him/her”

Roxanna: Gah!  I have 4 couples in my Summer story!  They just kept popping up!

Milli: No wonder you were struggling with that one!

Kate: Ooof. Depends on the story. Some characters come to be fully formed. I know them and their history, and it just flows

Brandy: I was watching rodeo videos on YouTube trying to get some terminology down and came across some very nice bull fighters aka rodeo clowns that were easy hotter than I expected

Roxanna: I wanted Mandy to try matchmaking.  And she’s hiring folks to work at the hotel.  And we needed a relief bartender. And the contractor had to have kids! And there’s a rodeo in town.

Kate: I just knew who they were and the story I was telling.

Milli: Sometimes it just falls together, sometimes it takes a while to steep in the cup

Kate: Other characters surprise me constantly, and do whatever the hell they want.

Milli: And sometimes I binge and dry up

Brandy: But most the time my characters are just the voices in my head coming to life

Roxanna: Only two out of the four couples got to have on-screen sex.

Milli: He wasn’t supposed to drop the L-Bomb until the end, but he drops it half way through!

Kate: The story I tried to write is still at the werewolf growling over his newly found mate…. he won’t talk… bastard furry ass!

DLH: These two came as a surprise when I wrote in answer to a prompt a while ago. Thinking of an unusual way for them to meet, being taken hostage in a bank robbery seemed pretty outrageous. Then I couldn’t make Nate be a bad guy, so he morphed into a shape changing undercover detective. He does his best to keep her safe. I just tweaked the opening a bit and sent Char to the Bowman’s Inn before she goes to the bank.

Ok, one more question: what’s the MOST FUN couple dynamic in your story?

Roxanna: The teenagers, J’hari and Cole.  Young love, and a kid sister.  I’m bringing them back for Fall.

Kate: oh man, I’d actually have to say Sonrisa and her brother. Non-romantic, but so much fun to write. They nag on each other as only siblings can.

ED: I only have one couple in mine… but they were fun in their banter

Milli: I loved writing the scenes of snark between Tenley and Will.

Roxanna: ED, I love when he Tegan grabbed her phone and told Adam a thing or two.

Brandy: Must fun dynamic would be Casey’s dirty mouth and the reaction Kate had to it.

So have you all seen each other’s stories?

Roxanna: All but one.

Milli: I think all but one…

Mine too many times to count…

Kate: No, I was bad. I’m in the middle of publishing season and getting a webcomic running

Brandy: Yup!  You know I haven’t read my own story the entire way through, it just kinda appeared on my screen

DLH: Nate pretends to be coming on to Charlene in order to give her clues as to what will be happening. There’s a connection between them at that moment, and he kisses her. She imagines a future where he gets a light sentence and they live happily ever after. It’s so cute!

Any cross-contamination between the stories? Like some detail you tossed back and forth? (Aside from the original prompt, of course)

Roxanna: No, we practice safe text.

Brandy: I don’t think so.

Milli: was a question of whether or not a rodeo clown had his moment yet, but otherwise…

Roxanna: We use each other’s characters some.  Okay, I do.  I totally stole everyone’s characters.

Milli: Nothing is safe when we get to chatting.

ED: We use Val

Brandy: Oh boy do we use him!

Roxanna: I even stole Brandy’s bartender from another story and changed his name from Russell to Rusty.  She’ll never know.  D’Oh!

Brandy: Haha, you can use Russ all you want. He has stamina.

Milli: Oh, I did mention Katie May from the Spring Anthology.

Roxanna: One of my critiquers wanted to know why everyone in Anteros was so good looking.  I did not comment.

Where is Anteros again? ‘Cause I need to get there, just to ogle that hot bartender

Roxanna: It’s never stated which state, but I model it after Independence Mo.

EP: Now I have this picture of a wild improv group of goofy deities creating the universe.

Kate: Dammit, now I have a story.

Exactly. You are your characters’ pantheon.

So are there going to be four volumes in all, one for each season?

Roxanna: In the first year, yes.

I’m amazed at the one review that says they have never seen an idea like this.  So we could keep going.

ED: Hey, I have to finish the other four stories I’ve started.

What I’m liking here is the wild energy of group world-building.

Roxanna: We use an erector set.

Kate: I was just happy they had everything I needed to jump into the project. I basically could post a question and get directed to picture or website that had the answers

Roxanna: I was so happy you were willing to jump!  I really have lucked out with great talented writers wanted to be involved.

Roxanna: Feel free to pin things in the Bowman’s Research board on Pinterest.

Kate: Oh it was fun to write and I don’t mind helping out my friends. And writing outside of my universe is a challenge for me

as well as writing outside my genre.

Brandy: You did an amazing job though Kate! I totally wanted to see more from your leading ladies.

And not just more skin, but like continue the story.

So did Roxanna start out as the editor for the project, or did she get drafted?

Brandy: Rox was the mad genius behind it all.

Roxanna: I am kind of the volunteer story editor. My husband was going to line edit, but got a job.  So then we hired out for a copy editor. Aw, thanks kids.

ED: Pretty much the crazy mad hatter behind the curtain.

I‘ve had improv exchanges like this with writing pals on Twitter, and one of them is starting to coalesce into … something.

Roxanna: Oooh.  Can I preorder that?

Milli: Well why would we act our ages? That’s really no fun.

This has been lots of fun! Great meeting you all!

And your muses, of course. This is a really exciting project, especially the amount of fun you’re having.

4 Responses to Vacations in Romancelandia: Interview with the Bowman’s Inn Collective