From Fan Fiction to Original Fiction: On Backstory (Excerpt) 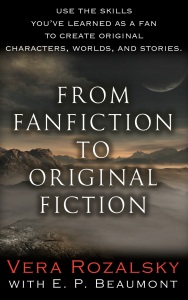 Everybody hates the info-dump, right? Writers hate how much their readers don’t know, and try to spare them the perils of ignorance; readers hate how much stuff the writer is feeding them (Why are you force-feeding me this set of diplomatic correspondence? I did not want a geology textbook for breakfast! What’s with this prologue four thousand years before the story starts?)

The beautiful thing about the best fanfic is that it simply takes it all for granted, and only alludes to backstory when it comes up for discussion because of something in present tense.

“Well, of course you don’t need to tell all that. Everybody reading this is a fan.”

Au contraire, my friends—I have read awesome fanfic in other fandoms in which I have zero clue about the canon material. Why just the other day my buddy Truant sent me to read a fanfic called Persephone on Archive of Our Own, based in the universe of the film Prometheus. I didn’t know anything at all about the film, but the story read very well nonetheless, as a creepy and yet weirdly moving relationship between a robot and a human. (One of the tags read “Is it het if he’s a robot?”) To me, it was simply an effective and elegant science-fiction short story.

Great fanfic in alien fandoms is simply great fiction, to the uninitiated reader.

This entry was posted in Writing and tagged Excerpt, From Fanfiction to Original Fiction, Nonfiction, Vera Rozalsky. Bookmark the permalink.