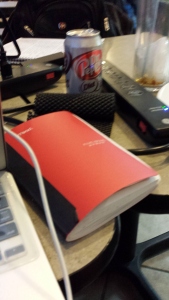 Notebook and pen. I started writing in pen long before they officially let us handle that deadliest of weapons, so most of my juvenilia are written in ball-point pen in composition books. This is old school, and it’s also evergreen. My colleague Becca Patterson is currently supporting her writing practice in short story by use of a school notebook that goes with her everywhere.

Electric typewriter. I don’t have a picture of mine, but I got it for Christmas 1978 and it was the platform upon which I wrote many novels, term papers, student newspaper articles, and other works.

Here’s a kitchen counter-top workstation I set up in my former apartment. Note the use of the clip by way of copy stand.

Bluetooth keyboard (ThinkOutside Sierra) and Palm Tungsten E-2. No, my Palm did not talk to the internet, by my choice. I could have bought a model that prefigured today’s smartphones, back in 2006. I bought my handheld purely as a back end to a keyboard that folded and fit in my pocket. 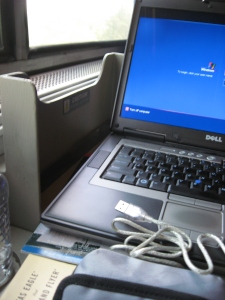 Laptop: I didn’t own a computer of my own until 2008, the golden year when I also acquired my first mobile phone and internet accesss at home for the first time. Before that, I piggybacked on the machines several employers let us use after hours. I kept all my files on a SD card and later a flash drive. It wasn’t until I started doing digital photography that I contemplated a machine of my own.

What I bought was this engineering workstation (Dell): one step down from the very top of their line in 2008. I wasn’t doing video editing or animation, so I didn’t need the ultimate powerhouse. It was heavy and only nominally portable, but I got a good life out of it (several million words, not including code) from April 2008 to October 2011, when it was decommissioned in favor of a Macbook Air, of which more later. It weighed a freaking ton and was portable only in the most generous possible sense of the word.

This machine was custom-built using Dell’s web site, so I crammed it with as much RAM and processor speed as could be managed at the time. I continued to use the Bluetooth keyboard as an auxiliary keyboard, though in December 2009, it was superseded for that purpose by my Alphasmart Neo.

Alphasmart Neo: bought this in December 2009, on advice from NaNoWriMo buddies. It’s basic, really basic, and at the time cost less than $200. (They’re no longer manufactured in the USA but can be obtained on eBay). This is pretty much a dedicated keyboard, built for use by school children learning keyboard use for the first time. Power source is three AA batteries or a rechargeable battery pack. Time between replacement/recharge is approximately 700 hours of active use or (for me) about six months.  Compare that to an eight-hour battery charge for most laptops, and you know why I use it. It has eight dedicated internal memory slots which collectively can hold a full-length novel, and via USB cable you can download text to the word processor of your choice, on nearly any operating system. Pretty much you need a USB port and you’re good to go.

But oh, what a wonderful machine for banging out a heap of words. I now own four of them, which I loan out to protégé(e)s for distraction-free first draft writing. 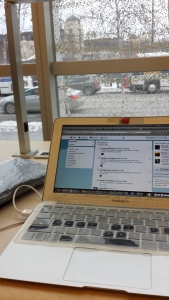 Macbook Air, 2011. Bought this, again under influence of NaNoWriMo, as a platform for the Scrivener software. At that time, this super light weight machine drew my attention for its solid state drive (more temperature and impact resistant than the optical drive on my Dell). Nonetheless I bought it a ton of shock absorbing jackets, a la northern hemisphere toddler bundled for arctic chill.

This entry was posted in Writing and tagged Technology, Writer Tech. Bookmark the permalink.

1 Response to Writer Tech: A Short Autobiography in Writing Tools